Credit: Jon Durr / Stringer
Editorial #: 525682998
Collection: Getty Images Sport
CHICAGO, IL - APRIL 28: (L-R) Joey Bosa of Ohio State holds up a jersey with NFL Commissioner Roger Goodell after being picked #3 overall by the San Diego Chargers during the first round of the 2016 NFL Draft at the Auditorium Theatre of Roosevelt University on April 28, 2016 in Chicago, Illinois. (Photo by Jon Durr/Getty Images)
Restrictions: Contact your local office for all commercial or promotional uses. Full editorial rights UK, US, Ireland, Australia, NZ, Canada (not Quebec). Restricted editorial rights for daily newspapers elsewhere, please call.
License type: Rights-managedRights-managed products are licensed with restrictions on usage, such as limitations on size, placement, duration of use and geographic distribution. You will be asked to submit information concerning your intended use of the product, which will determine the scope of usage rights granted.
Max file size: 3861 x 2574 px (12.87 x 8.58 in) - 300 dpi - 2.19 MB
Release info: Not released. More information
Source: Getty Images North America
Object name: 609385781JH00027_NFL_Draft

THIS IS A LEGAL AGREEMENT BETWEEN YOU ("LICENSEE") AND A SUBSIDIARY OF GETTY IMAGES, INC. ("GETTY IMAGES"). THIS AGREEMENT APPLIES TO LICENSES ISSUED VIA THE WEB AND VIA LOCAL SALES REPRESENTATIVES, AND IS APPLICABLE TO ONLINE, DIGITAL AND ANALOGUE (PHYSICAL) DELIVERY OF LICENSED MATERIAL (THE "AGREEMENT"). 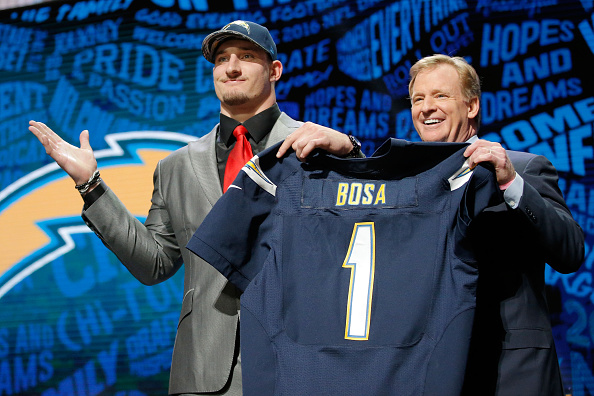 Embed this image
Create and embed a slideshow

Now you can create a slideshow with up to five images selected from our spectacular collections and embed the slideshow to your website or blog. Create your slideshow

By using the code above and embedding this image, you consent to Getty Images' Terms of Use. Note: Embedded images may not be used for commercial purposes.
Search for images, then click to add up to five images to a slideshow.
Your search did not return any result
Pageof
How do you like this Embed experience?  Let us know